It's good to cover the good news 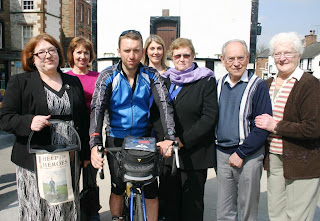 Whenever there’s a slow news day I take a walk into Appleby and visit the Tourist Information Centre to see if there’s anything coming up that I may have missed – but also because it’s when you are out and about you find the real human interest stories.

I just took my car into the local garage and walking back I was given a couple of stories that you’ll be reading about next week – such as how an Appleby business woman is expanding and opening a second shop.

I was delighted this week went I called into the TIC to discover they had been visited by a secret shopper working on behalf of the North West Development Agency – and they had achieved top marks of 100 per cent for their face-to-face service and in the 90s for the online and telephone guidance.

Every time I call in they greet me with a big smile and a cheerful “Hello” and it’s good to see people getting the recognition they deserve for going that extra mile – click here to read their news story.

But sometimes the stories come to me – via my hairdresser this week. She was cutting my hair and telling me about her nephew who is in the RAF and is spending his leave doing a 1,000 charity bike ride in aid of Help for Heroes.

He was given a heroes welcome in Appleby at the weekend. Click here to see the news story. But it is only when you see such a lovely young lad that you realise the price we pay for war. He had been inspired to do the cycle after visiting his friend who had been injured in a bomb blast in Afghanistan.

This was Appleby’s opportunity to give recognition not only to Dominic who was doing the cross country cycle, but to all the other servicemen and women service on our behalf across the world – and the town did a great job. The Mayor Elect, leaders of the Air Training Cadets, the Royal British Legion and many more came to support him.
Here’s Dominic Murray on his cycle challenge in Appleby met by the Mayor Elect, his mum, aunty, cousin, grandfather and grandmother.
You can help him raise more money by going to his Just Giving Page.
Posted by Cumbrian Messenger at 07:48