Oh what a show time in Eden

The kids are back at school and the nights are drawing in, but for a reporter in rural Cumbria it is the last of the agricultural shows that heralds the end of summer.
Every weekend there seems to have been a town or village show and I must admit it did feel like Ground Hog Day at times – the same faces, the same horses bottoms.
Nearer the end of the show season in the Eden Valley I was having to double check I hadn’t already photographed the same person with the same show bird at an event the week before.
But it has been a great show season for everyone – despite everyone complaining about the wet summer we have had, every show except Dufton’s Royal Fellside enjoyed sunshine all day long. And even at Dufton it was only the odd, but very heavy shower. 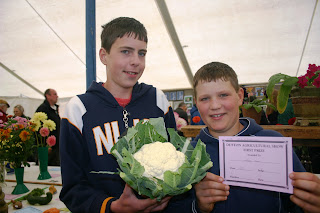 And the rain at the right time has led to a bumper showing of vegetables, especially the giant entries. Though the poor old garden flowers did get a bit of a beating from the rain and wind.
The summer shows are the backbone of my reporting during July, August and September, and though it is hard work getting the results, photographs and videos uploaded the same day as the event, it is well worth it. And my work is a lot less than the volunteers who spend the whole year planning and working towards a day that can be wiped out with one bad day of weather.
Though based on competitive spirit, these traditional shows bring everyone in the community together. And I always come away with more news stories. It is a time when you get the chance to catch up with people, have a chat and remind people about their daily, local news websites http://www.edenvalleymessenger.com/ and http://www.thelakedistrictmessenger.com/
Take a look at the video’s from this year’s Eden Valley shows and see for yourself. And don’t forget to leave a message or comment. Your feedback is important to me. Now the show season is over for me, I'll be writing my blog again to give you the inside view of life as a reporter in rural England.
Dufton's Royal Fellside Show Crosby Ravensworth Show and Vintage Rally, Appleby Show, Ravenstonedale Show and Brough Show.
Posted by Cumbrian Messenger at 08:40