Romanian mission working in the sunshine on the House of Joy


Once again we woke to another glorious day. The weather has been exceptional as normally this time of year they expect it to be -10. Most of the time working outside we have been in T shirts and sweating when working. They are saying that rain is on it’s way, but never mind, the weather we have had has been a blessing.

Levi was saying that they are making the most of the good weather to get on with the building work as when the winter really sets in they will have to stop until the spring. When you consider that most of the construction work is by hand, you can understand why they will stop. While working outside this morning I began to think about this. Mine and Rays job was to continue digging some holes for concrete supports and Levi said to me that they needed to be 50cm deep, so I asked him for a tape so that I could keep measuring but he said just to go to the top of my knee then it would be deep enough! Anyway, as I was digging I thought to myself, if it was -10 there is no way that I could dig this hole as the soil would be solid and so cold to work. Fortunately we got the holes dug before lunch so that we could relax and prepare for the evening meeting at the Baptist Church in Luna De Sus. 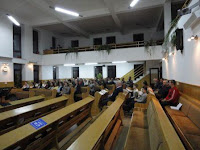 Before we started work this morning Levi brought the Romanian team into the house we are using for prayers. He thought it would be good too if we went around every body to say a bit about themselves so that we can get to know each other better. We found out that Richard is from the Congo, that Dr Stanca, who is 84, spent time in Siberia because of the Russians and that Dorrian wants to start a church. At the end we knew each other more intimately.

In the afternoon our team spent time preparing for our visit to the church at Luna. We set of at 4.30 and the people carrier would not start as the battery was flat. Fortunately we were able to take the Dacia car and made our way into Cluj. Yesterday Levi had taken us to Luna to meet the aid lorry and to show us the way so that we could go on our own today, and although we did make one wrong turn, we got there on time. It was nice to meet up with pastor Pal again and he showed us around the church and then asked us to join him talking to some young women who were preparing for baptism in December. Pal asked Ray and I to have some input and he interpreted for us. After a little while the women said to him that they could understand English! 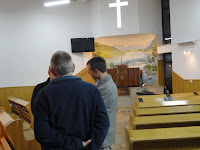 The service began and Pal had Anita, Ray and Maud give testimony for a time. Some hymns had been sung which were sung in Hungarian as this part of Romania used to be Hungarian. We then sung ‘Give me oil in my lamp’ to the congregation and some of them knew the tune so joined in with us, although some just laughed – did we sing that badly? I finished off by bringing the word of God and then we said our goodbyes to the congregation. 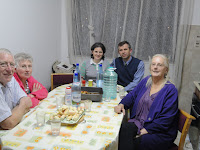 Pal then took us up to his apartment which is at the top of the church and we had super; chicken and roasted vegetables followed by some cream filled rolls that a member of the church had made for us. We didn’t have many – honest.

Tomorrow we have a big day as we have to leave early to go to the prison in Gherla which is over an hour away. We then come back to Cluj to meet up with Pal to go to his other church in Mera in the afternoon.

It is now nearly midnight so I am going to sign off. God bless you all.
Posted by Cumbrian Messenger at 00:51